Why do women shave their body hair?

A more accurate title to this post would be, Why do most woman in certain “Westernised” cultures shave their body hair? But that was a bit much for the main heading.

So, why do women shave their body hair?

The following video may be a bit of an eye-opener for many folk.

As someone who has always admired women self-assured enough to not subscribe to the social pressure of female body-shaving, I have often wondered when this odd activity began. Turns out it was relatively recently and, no surprise, it has links to the modern propaganda of consumerism.

Negative reactions to an non-shaved woman and female body hair

I am often surprised at the strong reactions many men, and women, have to the notion of a woman not shaving at least her legs and armpits. These days many consider shaved pubic hair area around the female genitals[1]The female genitals in general are often mistakenly referred to as the “vagina,” which is actually the interior ‘tube’ … Continue reading a necessity too.

From my perspective… It’s a sign of deep unconscious social conditioning and mental impositions and programming. In many cases it may also be an unconscious expression of the malice and fear some men hold toward the feminine, especially as expressed by an empowered and mature woman. In today’s world, the shaving of legs and armpits is, by some, no longer considered sufficient. According to many, a woman must now also shave her genitalia in order to be appealing, sexy, and attractive. To me it just looks very very odd, and always leaves me feeling it’s a deeply twisted act.

The end result is women artificially kept is a visual state of prepubescence.

Question is, why do so many men (and women) find a prepubescent female body more attractive and acceptable than a natural, whole, and adult female body? If you have any interest in genuine self-awareness, it’s a question well worth self-investigating, whether you’re male or female.

If this is a subject of interest to you, you may like to read an article I wrote about female body hair in 2009 — The Bare Naked Earth.

Don’t be a ghost in the machine…
Please take a moment to comment below. 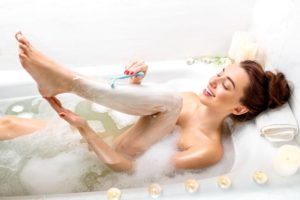