Belief is only required for that which is not real

Belief is a substitute for reality. Oftentimes, a rather poor or deficient substitute. Although, it is also possible for belief to be a useful substitute, whereby it functions as a kind of stepping stone into a deeper, fuller, and more direct engagement with reality. From that initial engagement the possibility of a deeper relationship with reality is born. Beliefs, when they take on this function, are somewhat like keys, which can open specific locks and doors. Of course, as with any key, once the door is open it is up to us to walk through it, leaving the door and the keys behind.

The use (door-opening) function of certain beliefs—not all, just those that have the means to function as stepping stones toward infinity—is almost instantly aborted when I identify with a belief. In order to use something as a stepping stone, which implies it is something temporary and quite likely utilitarian, it won’t help to be identified with it. If I am identified with the train I am riding on, I won’t want to get off when it arrives at my destination. If I am identified with a stepping stone, I won’t willingly take the next step off of the stone toward my destination. “Utilitarian” means something functional, rather than merely attractive. One must be very cautious of beliefs that are dressed up as something attractive, whilst having no life-affirming function. We must ask, who has dressed it up so attractively and, in doing so, what function is it serving for them, as opposed to me the believer?

What is true and what is real?

From my perspective, generally people become fanatical and dogmatic about their beliefs out of a deep-seated sense of dis-ease with themselves, a deep sense of uncertainty about themselves relative to the vastness of the creation in which they experience themselves. Fanaticism can take many forms, and play out on many levels, from the gross, to the sublime, to the surreal and the silly.

Addiction and fanaticism are very similar, with closely related roots in the human psyche. Both arise from a loss of one’s ability to make a conscious choice. Loosely put, both arise out of the same dis-ease with oneself, of deep uncertainty. Addiction and fanaticism are just two very similar ways in which one might compensate for this uncertainty. Another condition that arises from deep uncertainly is a confused sense of over confidence. This may seem like a contradiction, that surely one who is confident is self-assured. But that’s often not the case. By confused, I mean a confidence that’s not based on reality, but on some level of delusion. Most of the people currently trying to rule the world suffer from this condition of excessive and deranged confidence. It’s what enables them to charge ahead with atrocious and heartless actions all the while convinced (i.e. confident) they are doing the right thing. This condition of confused confidence readily becomes sociopathic, even psychopathic, when taken to an extreme.

Liberating Beliefs, and liberation from belief

Coming back to the subject of belief…

Until a person really knows themselves in consciousness, as an emanation of Pure and Total consciousness, belief can be very tricky to avoid. it is the nature of the thinking mind to develop and hold on to beliefs. The ration mind is only capable of dealing with (of cognising, and re-cognising) the Known. Yet, nearly all of reality is in the realm of the Unknown. Modern society conditions people from childhood to give utmost importance to the Known, and to base their entire identity on the Known. Because most of what you and I are is in the Unknown, this sets up a very unsettling situation for the soul.

Imagine if the thumb on your right hand was all you knew of your body. It would be rather unsettling. You would have experiences and sensations arising from the rest of your body, and yet the only part of the body in your Known (the only part you have any knowledge or consciousness of) is the thumb on your right hand. What are you to make of all the other stimulus and information coming to your from the rest of your body? The choice most people make is to go into deep self-denial, which means deep self-suppression. If we go along with believing only the thumb exists, deep self-suppression is necessary to maintain such a delusion. This is how it is for the average person. Nearly all of what they are, as a Being-ness in Consciousness, is in the Unknown. The souls gets very disturbed by this kind of fanatical fixation on materiality, on the superficial.

There is nothing wrong with believing something. It only becomes problematic if I strongly identify with my beliefs, or if the beliefs I am holding on to go against the basic laws of nature. In the first instance, I will refuse to step off the stone when it is the natural moment to do so, and in the second instance the stepping stone is on a pathway to deeper ignorance, less consciousness, greater perversion, confusions, and deception. In order for a belief to be really useful, it’s important it be a stepping stone on a path that ultimately leads to salvation. A path of freedom, which means a path of Heart.

By freedom I mean freedom from confusion, from deception, for mis-identification. This is potentially quite different to freedom from pain, challenges, hardships, and that sort of thing. Which is often the kind of freedom people mistakenly pursue through their interests in spirituality. Pain and challenges will continue to arise in accordance with one’s particular debts or karma (the ways in which we have mis-used life-force, due to unconsciousness). But with freedom, in the true sense of the word, one ceases to suffer through pain, and ceases to suffer in their challenges. Instead, you simply face them by bringing forth your spirit, and taking it moment as it comes. Pain and challenges become the means to awaken into consciousness, rather than something to suffer from.

How to apply this?

What can we take from all this? What to do with it? I suggest you question your every belief. Question where they lead to if followed, if taken to their logical and ultimate conclusion. Also, from where did they originate? From where did you derive the beliefs you hold on to? Also, question whether you have become attached to certain beliefs, and whether you base aspects (however subtle) of your identity on them. Could you let those beliefs go, right now, if you were asked to?

Ultimately, we will come to a state of having no beliefs. The spirit does not have any use for belief. The spirit has direct perception of reality, as it is. If I experience something directly, what use is it to bring a belief (a mental construct) in between? For example, it’s very common to speak of belief in God, or believing there is no God. Whether a person believes there is a God (some form of all-pervading super intelligence out of which creation is emerging) or a person believes there is no God, neither person is directly experiencing reality. Both are caught in the same trap. In both cases, if they are staunch about their beliefs, and identified with them, there’s a great chance direct experience of God will be impossible.

So, it is best to loosen the grip we have on our beliefs (or that they have on us), and surrender a little more each day into the Unknown. This requires more Heart, and less mentalisation. The Heart is naturally inclusive toward reality, whereas the rationalising mind is naturally divisive and exclusive. This divisiveness is functionally useful when it comes to focusing on, and acting on, specific details within the Known. Yet, it is utterly prohibitive when it comes to experiencing reality, as it is, in its totality and wholeness, which for the human being is almost entirely within the dimension of the Unknown. 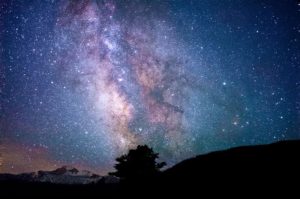