For the past three years I’ve been undergoing intensive spiritual training. I am in an apprenticeship learning the holistic wise ways of our indigenous ancestors, which includes the art and science of being a spiritual care-taker of the Earth. What is being passed to me is ancient living wisdom, carefully preserved for millennia by the Kogi Elders (known as “Mamas”) in Colombia. The Kogi are a fully in-tact pre-Columbian civilization—who for approximately 500 years went to great lengths to remain hidden in the dense jungle of the Santa Marta mountains in Colombia. They emerged in the late 1980’s with a serious environmental message for the world.

If you are not familiar with who the Kogi are, and with the extraordinary role they play in the world, please take some time to find out. You can watch the BBC documentary of their message, released around 1992 here: http://bit.ly/kogivideo. There are also numerous articles on my web site, here:  http://bit.ly/kogiarticles

Restoring sites in America to help balance the world

Every year, for the past 12 years, an extraordinary occurrence has been taking place in North America. Kogi Mamas have been discreetly visiting and spiritually reconnecting with and restoring sacred sites all over the region.

Each time they come, these elders (one is in his 70’s, the other is in his late 90’s, around 100 years of age) walk for roughly 6 days through dense jungle, and then fly to North America where they travel thousands of miles by land. What is their purpose for coming such a long way to walk upon and connect with special natural sites in America? Simply put, they are dedicated to resuming the spiritual work the mostly-decimated and displaced indigenous of North America are no longer able to perform. They see this task as so crucial and fundamental to the well being of the entire Earth and humanity, that these elders first spent 9 years preparing for the task, and then the last 12 years performing it.

The sacred sites of America are linked with sites all over the world. This work of restoring and harmonising these sites begins in the US, and from there is spreading to many other nations.

It was not possible for the Kogi Mamas to do this work alone. They have the help of an ancestral Mama, from Colombia—the gifted Native Andean maestro Mama Koginka Kamaru Xue—who has been living in North America for over 22 years. He has been deeply involved in orchestrating this entire undertaking with the Kogi Mamas in North America and globally.

Over the past 12 years the Mamas have visited and engaged with approximately 400 sacred sites right across America. This has required one or more pilgrimages (sacred journeys) every year, with months of demanding preparation and months of travelling by car and on foot, to oftentimes challenging and remote locations. He has intentionally and tirelessly performed this work without fanfare or public attention of any kind.

Over that same period, Mama Koginka has been training a small group of people, mostly from North America, in intensive spiritual, shamanistic, and holistic healing practices. He has been preparing them to hold and maintain the work he and the Kogi Mamas have been carefully weaving within North America. This is the training I have also been undertaking, in preparation for holding the same work and process in New Zealand. There are also apprentices from Sweden, Panama, Africa, Canada, and England, who are being prepared to work in their respective countries.

Spiritual ecology work, such as this, is not a personal pursuit for one’s own advantage or gain. It is a silent act of service which dedicated people have been performing around the world for countless millennia. It is the most original kind of “environmentalism,”—the act of protecting, sustaining, and harmonising the deep ecology of the environ in which we exist, physically, and spiritually.

Why is restoring sacred sites in America important, and what’s it got to do with the rest of the world?

What are sacred sites?

For as long as recorded history can account for, all indigenous and traditional cultures have recognised the existence and significance of crucial geo-spiritual locations, or “sacred sites,” within the natural environment. Just as the human body has key features with specific functions—like the eyes, kidneys, heart, lungs, spinal column, brain, etc.—the Earth also has special sites or features which perform a function within the living matrix of the planet. These sites typically take the physical form of mountains, lakes, rivers, caves, etc., yet what makes them “sacred” is the function they perform at an energetic level. These sites are not “sacred” simply because people decided to call them that, or invented such a concept about the sites.

Such sites are deemed “sacred” through direct recognition that they have energetic (and, often-times, ecological) significance to the entire living Earth. Many spiritual and cultural traditions recognise the human body also has “sites” that perform a “spiritual” or “energetic function”. In Hinduism they are referred to as chakras. In principle, these are not dissimilar to the sacred sites around the Earth, and they too need to be attended to and spiritually balanced for human well-being.

The Indigenous Elders — the original highly trained “doctors” of the Earth

The Kogi Mamas (“enlightened ones”) are masters in the art and science of identifying, protecting, harmonising sacred sites. These sites are all energetically interconnected, just as all the many features of your own body are interconnected. The Mamas are masters of seeing and working with these connections, and the sites themselves. They are like highly trained doctors of the Earth. The 100 year old Mama we work with spent the first 27 years of his life in near total darkness training to be a Mama. The other Mama was trained in the same way for 18 years.

The relatively modern concept of “spiritual ecology” (click here to learn more about it on Wikipedia) is something they have practised, according to them, since the beginning of time.

Their dedication is extraordinary. Day and night, all they do is practical and spiritual work for maintaining the balance of their environment and the entire Earth. By Western standards, they would be considered living saints. But for them, this is simply and profoundly what they, as spirits, agreed to do… so they get on and do it.

This is a work no one can do alone.

Observing nature we see that nothing living, natural, and real functions alone or in a state of independence. All life is interconnected.

Over the coming years, the Mamas are stage-by-stage handing over the work they have been doing in North America, so that ultimately it will be performed by people born there. The first major step is a group “pilgrimage” in which we will travel by land to approximately 200 sacred sites in the USA. This momentous undertaking will involve a group of 20 to 30 dedicated people who, over at least eight weeks, will visit, be introduced to (in spirit), and re-link with sacred mountains, lakes, rivers, and other natural sites.

No one will be paid or financially remunerated for this work in any way. Just as their many years of training has been a personal sacrifice of time and energy to re-learn the original ways of Mother Nature and the art of working in consciousness with the living Earth, this pilgrimage is a mission the participants will put all other worldly commitments on hold to fulfil. It is not done for their own self-gratification, rather it’s purely for the well-being of the Earth and all life and humanity at large.

I have been asked to participate in this two month journey and process as part of my on-going training in these ancient spiritual arts. It’s all part of my long-term preparation for being closely involved in the same kind of undertaking in my birth country of Aotearoa (New Zealand).

The success of such an undertaking depends on the spiritual support of Mama Koginka and the Elders, and on the financial support of those who feel moved to assist in something so unique and so crucial.

It is estimated the total cost for an undertaking such as this will be around US$200,000. The Koginka Sewaluna Foundation—the 501(3)c non-profit organisation in the USA, orchestrating this work there—will need to purchase a bus to transport up to 30 people (and luggage). There are also the costs of gas, food, lodging, possible national park entry fees, etc. The participants are endeavouring to cover as much of their own direct costs as possible.

It’s not practical, nor is it everyone’s calling, for most people in the world to directly take part in training and spiritual work of this kind. It is a huge sacrifice, and honestly it’s not everyone’s cup of tea. Yet, we can all help play a part, and one key element is the gifting of financial assistance. All the money in the world ultimately represents life-force and resources borrowed from the natural world. This is one of those rare opportunities to give some of that energy back in the form of sacred reciprocity for genuine spiritual and ecology restoration work being done by those National Geographic referred to as The Keepers of the World.

Another powerful way to support this project is to Share this article, or the campaign itself, and any related social networking posts, with your friends and community on Facebook, Twitter, Instagram, etc., and also by email. Please take a moment to do so. Each person who this reaches is another person in the know, who might also pass it on or feel moved to support it in other ways. 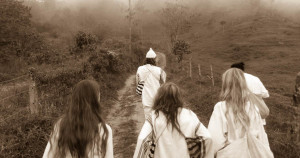