Burning Man, or the Burning of MAN? 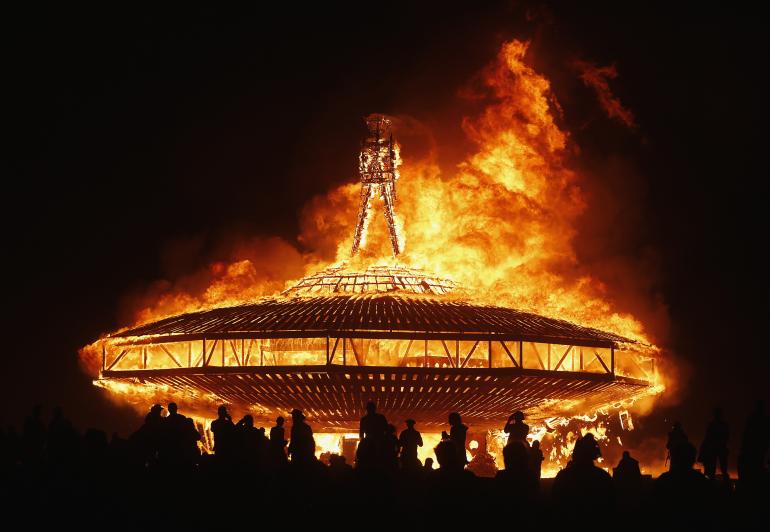 I’ve never been to a Burning Man party/gathering. I can see no reason why I ever will. I do, however, know plenty of people who go to Burning Man. It’s because of this that I gave Burning Man some consideration a few years ago. What I saw was something completely out of alignment with LIFE. The name, ironically, says it all.

MAN is a Divine Principle. In simple terms, the immediate function and purpose of the Spirit of MAN is to sustain and nourish the energetic organisation of the Earth—the Mother’s Creation—and to be a direct participant and actualising Presence in the spiritual evolution of the Earth. The fulfillment of this Divine Function requires a great deal of dedication, discipline, spiritual training (initiation; the passing on of authentic ancestral lineage), self-investigation, and more. Most of humanity is only engaged in this process of LIFE in a relatively passive way.

When I hear the term “Burning Man”, spiritually, I see the image of MAN burning. Some might say “Burning in hell”. “Hell” being the epitome of Man’s degeneration into deep unconsciousness, in the name of conscious choice. Hanging out at events like this has the potential to leave the spiritual Principle of MAN in you, burning. Consumed. Infiltrated by forces you may be barely aware of.

Yes, there is something important and appealing about the free expression of Man. About breaking free of cultural conditioning. About stepping out of 9 to 5 tick-tock reality, and into something beyond the humdrum of consensus reality. These are potentially a vital steps on any genuine Path of Freedom. But as I have written and voiced elsewhere, the way dark forces work is to hi-jack and subvert the potential of The Mother’s creation. Darkness can not create anything genuinely new. It can only undermine and twist what already is. The need for Man to break free of conditioning already IS, and yet there are ways to go about it. Man’s need to step out of consensus reality already IS, and yet what reality are we stepping into when we take that step out? The world of ordinary man is rife with hi-jacked spirituality and counter-cultural movements. Burning Man is not some exception. A great deal of what I see in the so-called “New Age” movement is also heavily infiltrated and hi-jacked by dark forces. It’s just the way duality plays out. It’s the very challenge our Spirit has agreed to contend with as part of it’s emergence and actualisation into conscious participation with matter (the physical stuff of the Mother). I’ll leave it at that. 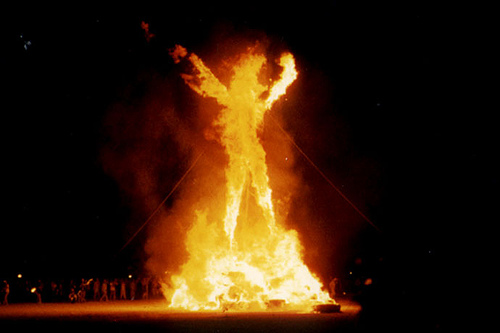 From my perspective, festivals like Burning Man are a construct emerging from the influence of demonic forces… from the unconsciousness of Man’s degenerate condition during this highly materialistic era on Earth. As a generalisation, festivals like Burning Man appear to me to be exceedingly self-serving, self-pleasing, and self-centred events that serve little more than the human ego in its great many material and spiritual delusions. It’s a great way to have a “good time”, and yet is it a good (like-affirming) use of time?

From the perspective of a Path of Freedom, I would have to say (for the most part) it is not. The excessive use of resources, the prevalence of drugs as a means to “higher consciousness”, sexual promiscuity, freakish and rebellious behaviour, and electronic music (for the most part) infiltrated by dark forces—this list could go on and on—indicates to me Burning Man is far from being a revolutionary phenomenon. From my perspective, it is yet another way dark forces are cunningly undermining the spiritual dignity and capacity of people who otherwise (for the most part) have a  genuine heart-felt desire to make a positive difference in the world. It’s yet another way of hi-jacking the consciousness of Man, in the name of something positive and spiritually progressive. Take look at these images: (click on them for enlargements) 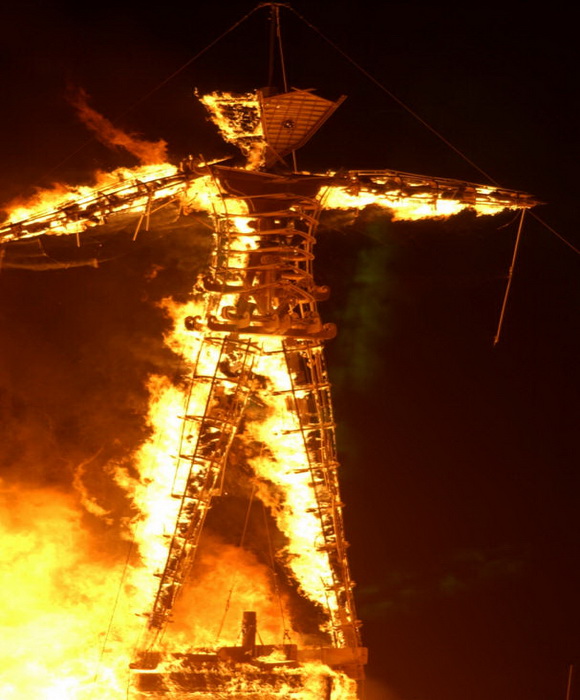 What is being depicted here, spiritually speaking? Engage your HEART and look into the matter. What is this imagery embodying? What is life-affirming about these symbols, and many of the other symbols common to Burning Man? In the first of the above two images we have the figure of a man burning up atop of what looks like typical UFO or Alien Spacecraft. Symbols are psychically powerful and can have direct influence upon the Soul of Man. Question these symbols… don’t just take it for granted that because they look kinda cool, they are cool. Investigate… using your spiritual discernment… the intelligence of your Heart.

For what it’s worth…

Any friend of mine who has a genuine interest in their spiritual evolution and in the fulfillment of their purpose with LIFE, I would strongly encourage to stay away from events like Burning Man. I have no intention of making this a long article on the demerits of Burning Man, and trying to explain my perspective in lots of words. I am not going to attempt to get into the details. This article is, admittedly, far more generalised than most of those I write. So please excuse my brevity, and lack of explanation beyond what you’ve read here. The following video will shed some light on a more detailed look at the delusion of Burning Man. The following is a video that came my way. From my perspective, this video does a decent job of revealing some of the hypocrisy and bullshit playing out through the Burning Man enterprise. And yes, it’s an enterprise capitalising on the intentions of a massive number of people… like so any other enterprises in the world today.

This next video is part of a speech Marianne Williamson gave at another (much smaller) counter-culture festival called Lightening in a Bottle. She makes some pertinent points about the potential fallacy of these festivals.

As Mick has pointed out in the comments, Burning Man is essentially a holocaust. A ritual sacrifice by the element of fire. Do the attendants of Burning Man stop to ask who it is they are making this sacrificial offering to?

Originally a Bible word for “burnt offerings,” given wider figurative sense of “massacre, destruction of a large number of persons” from 1670s. The Holocaust “Nazi genocide of European Jews in World War II,” first recorded 1957, earlier known in Hebrew as Shoah “catastrophe.” The word itself was used in English in reference to Hitler’s Jewish policies from 1942, but not as a proper name for them.