[fusion_text](NaturalNews) The flow of science in this modern age is largely controlled by just six corporate publishing groups, which by calculated design have been gobbling up the journal market since at least the 1970s. And a new study out of Canada reveals that this mass consolidation of publishing power is, to a large extent, skewing what passes as scientific progress.[/fusion_text]
[fusion_text]

Article from from NaturalNews.com

[one_full last=”yes” spacing=”yes” center_content=”no” hide_on_mobile=”no” background_color=”” background_image=”” background_repeat=”no-repeat” background_position=”left top” border_size=”0px” border_color=”” border_style=”” padding=”” margin_top=”” margin_bottom=”” animation_type=”” animation_direction=”” animation_speed=”0.1″ class=”” id=””][fusion_text]Researchers from the University of Montreal pored through the whole of scientific literature published between 1973 and 2013 and found that the publishing realm has changed dramatically during this time. Many smaller publishers have been absorbed into larger ones, for instance, and academic research groups have become increasingly beholden to the interests of these major publishers, which tend to favor large industries like pharmaceuticals and vaccines.

Much of the independence that was once cherished within the scientific community, in other words, has gone by the wayside as these major publishers have taken control and now dictate what types of content get published. The result is a publishing oligopoly in which scientists are muzzled by and overarching trend toward politically correct, and industry-favoring, “science.”

“Overall, the major publishers control more than half of the market of scientific papers both in the natural and medical sciences and in the social sciences and humanities,” said Professor Vincent Lariviere, lead author of the study from the University of Montreal’s School of Library and Information Science.

“Furthermore, these large commercial publishers have huge sales, with profit margins of nearly 40%. While it is true that publishers have historically played a vital role in the dissemination of scientific knowledge in the print era, it is questionable whether they are still necessary in today’s digital era.”

The following Natural News infographic illustrates the disturbing reach of this academic oligarchy:

The fields most controlled by this academic oligarchy include those dealing with chemistry, psychology, social sciences and the professional fields. On the flip side, biomedical research, physics, and the arts and humanities are influenced to a much lesser degree by these six corporate publishers, according to the study.

What this suggests is that, over time, certain disciplines have become more corrupted than others as they’ve been absorbed into the corporate publishing fold. Such content, though often skewed, is highly profitable for publishers which not only don’t have to pay for the articles they publish but also resell such content digitally at profit margins upwards of 40%.

“As long as publishing in high impact factor journals is a requirement for researchers to obtain positions, research funding, and recognition from peers, the major commercial publishers will maintain their hold on the academic publishing system,” added Lariviere.

But does publishing in high-impact journals really make much of a difference in terms of article exposure and the quantity of citations? Not really, the researchers found. The reach is roughly the same, they found, except that smaller publishers are less likely to be actively promoting a special interest agenda, and are thus less likely censor science that doesn’t correspond with the official narrative.

“One would expect that a major publisher acquiring a journal would have the effect of increasing the latter’s visibility,” said Lariviere. “However, our study shows that there is no clear increase in terms of citations after switching from a small to large publisher.”

“Our findings question the real added value of big publishers. Ultimately, the question is whether the services provided to the scientific community by these publishers warrant the growing share of university budgets allocated to them.”

Sources for this article include:

If this is a subject that interests you, here’s a PDF well worth reading. It goes into the issue of:

Science and the corporate agenda: The detrimental effects of commercial influence on science and technology[/fusion_text][/one_full] 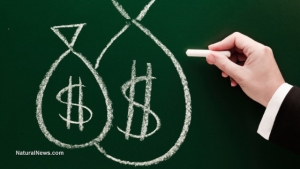