Which corporations control the world of Man?

A great many people don’t stop to consider just how much of the world of Man is controlled by just a few corporations. I remember reading about 10 years ago that something like 9 corporations controlled over 85% of the world food supply (I am recalling this figures from memory, so that may not be 100% accurate, but close enough). At the time the projected rate of food company amalgamations indicated that number would drop to around 4 to 6 corporations by 2010. I am not sure what the figures are now, in 2015.

The following infographic is worth considering, and feeling into…

Why is this important?

When only a few corporations control massive segments of our global society it has massive ramifications. For instance, much of the media in the world (movie, TV News, Newspapers, Magazines, etc.) is owned and controlled by just a small handful of corporations. What happens if those corporations are biased toward certain agendas or world-views? By default, they are all going to be biased, at the very least, to the agenda of their financial backers (major advertisers, investors, etc.). Without independent and diverse sources of media, humanity ends up with a very skewed perspective on the world, if relying on mainstream media as a source of NEWS and info on what’s happening in the world. That’s the situation today. 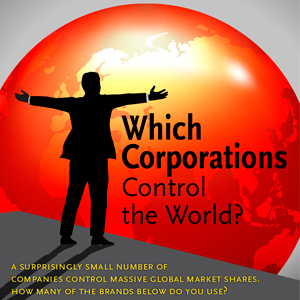