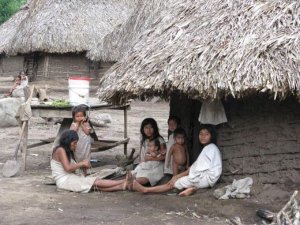 Driving east along Colombia’s coast past the port of Santa Marta, lush green jungle quickly envelops the two-lane highway. Glimpses of the turquoise Caribbean waters shine through the trees, while the 18,000-foot snowcapped peaks of the Sierra Nevada Mountains occasionally loom high above the forest. The Kogi tribe calls this region “the heart of the world.”

The Kogi have clung to their traditional way of life in these mountains since the Spanish conquest 500 years ago. In recent decades, they have been caught in the crossfire between guerillas, paramilitaries and cocaine traffickers. As a result of this violent contact with outsiders, the Kogi call the rest of the world “little brothers”—children who are ruining the earth with their greed for its resources.

Their shamans, or “big brothers,” believe they are the guardians of the earth, and make offerings at sacred sites throughout the mountains to restore a natural order ruined by our mistakes.

After I spent several days inquiring in the nearby city of Santa Marta, a Kogi chief invited me to a new Kogi village of 70 families called Dumingueka. Unlike most Kogi villages, which lie a day or two hike up the mountains, Dumingueka is connected to the modern world by a 45-minute truck ride up an often-impassable dirt road. The village is even more unusual because it was built with Colombian government support, boasts a modern health clinic and a meeting room for negotiations with outsiders. Many of the Kogi I spoke with say that throughout their history, the government has ignored them. Their complaints about the farms, ports and dams that cut through their most sacred sites have gone unheeded.

I tour Dumingueka with Arregoces Coronado, a young Kogi man and avid photographer who spends much of his time in the city. The vast majority of the Kogi speak only their indigenous tongue, but Coronado explains in fluent Spanish that the relatively accessible village is a “border town” between the Kogi and the rest of the world. Still, the village feels worlds apart the other towns and cities I’ve seen in Colombia. 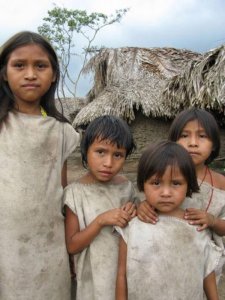 Kogi children in the village of Dumingueka

Families weave in and out of round mud and thatch huts connected by dirt paths and lined by lime-green leafed coca bushes. Some of the men chew the coca bush leaves constantly, which produces a much milder sensation than cocaine, and carry around gourds, which they paint with their coca-tinged saliva.

Coronado and I chat in the smoky darkness of the village’s large ceremonial hut, where tribal leaders discuss village matters and mete out proper punishment for rule breakers. The four campfires smoldering around us represent the cardinal directions.

A ten-minute walk from the traditional village, designed and built by the Kogi in the last year and a half, lays the new government-funded school and health clinic. The red-tile roofs, brick walls and connecting cobbled road would fit perfectly into any Colombian city, but seem anachronistic in the thick air of the jungle, especially among Kogi clad in traditional bright white clothes. But this clinic is critical for the Kogi, who according to the Colombian government, suffer from the highest rates of tuberculosis in Latin America. It provides a place for Kogi in far-away villages to come and receive treatment.

Coronado also leads me to a large rectangular hut full of plastic chairs, the meeting house that will be a place for “dialogue between the big brothers and the little brothers.” Discussion between tribal leaders and the government is critical for the recovery of ancestral lands; much of it now colonized by farmers and cocaine processors. The Kogi believe that access to these sacred sites is crucial to restoring equilibrium in the world. “For us, the sacred sites are the most important,” Coronado explains. “The shamans are very worried.”

He explains that unless the shamans can make offerings at these locations, the whole world suffers from catastrophes as a result of the damage they have caused.