The Kogi People and their message (reprint)

The Kogi of Colombia

The following article is being republished from the original found here.
I am posting it here, in good faith, without permission from the author (A.D. Caruthers), as I could not find a way to contact him/her.

As I pointed out on another ‘reprinted’ article on the Kogi, it is hardly accurate to refer to them as “lost”. I supposed people use that word for some kind of dramatic effect. Personally I don’t think it’s appropriate, as it stems from a self-centred world view. The Kogi don’t consider themselves lost, so we must ask, Who are they lost to? We (the people outside the Kogi culture) may have lost our knowledge that they exist, but by referring to them as a lost culture or lost tribe implies their status and definition as beings is somehow dependant on us and our view on the world. Ironically, if the world actually was to lose the Kogi (through extinction) it will be our cultures and our way of life that cause that loss.

Kogi Indians –  [Ancient] Culture and Their Message to Save Mother Earth

Concealed in the harsh mountains of the Sierra Nevada de Santa Marta of northern Colombia, live the indigenous Kogi Indians. It is these mountains the Kogi have occupied since the first century. Surviving through foreign invasions, missionary incursions, and environmental changes, the culture of the Kogi remains fully intact. Over 1,000 years later, the Kogi continue to sustain their traditional culture by keeping the traditions of their ancestors. Although there are no extensive records or details of the Kogi way of life, the art and ancient ruins that have been unearthed aid in telling the story of this reclusive people. However, scholars’ primary focus is on the way the Kogi view nature and the environment. As a people who rely on the mountains, the role of the environment is invaluable for surviving and preserving the Kogi’s cultural identity.

Nothing can shake the core of a culture more so than outside factors. In the case of the Kogi, it was the Spanish invasion. When the Spanish invaded Santa Marta in 1498 they enslaved and conquered all native Indians except the Kogi who were able to flee higher into the Sierra Nevada. The Kogi’s survival can be attributed to the rugged landscape and surroundings that protected them against the Spanish invaders (Mejia). Nearly 400 years after the invasion by the Spanish, a Jesuit missionary, Father Celedon managed to fight his way through the dense jungles of the Sierra Nevada and reach the Kogi (Tairona Heritage Trust). Even though the Father Celedon came with different intentions than the Spanish, the Kogi still perceived him as a threat to their traditional way of life and eventually fled to the western slopes of the Sierra Nevada. 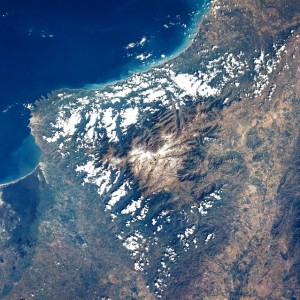 The Sierra Nevada is a nurturer, protector, and Mother to the Kogi. Because of the support and resources the mountain provides for the Kogi, there is no need for them to adapt to a progressing world. In fact, the Sierra Nevada has been described as a miniature planet. Known as being the highest coastal mountain in the world, the Sierra Nevada boasts every ecosystem in its 8,000 square miles. The arid deserts, mangroves, reefs, rain and cloud forests speak to the diversity of this land, a land that has fed and been continuously cultivated by the Kogi and their ancestors for over 1,000 years. As for who tends to the land, that is the job of the common people, those lowest on the hierarchy. The men and women are responsible for agricultural production. The males are responsible for weaving, woodworking, clothing manufacturing, and tool making, while the women are responsible for cooking, collecting wild foods, and making nets and bags. As the Kogi seek to live in harmony with their environment, families are constantly moving around different levels on the mountain slopes, planting in these “environmental zones” in order to produce a variety of crops. The diverse array of crops includes, but not limited to potatoes, beans, maize, sugarcane, fruit trees, onions, and pineapples. Secondary to the crops are domesticating animals that include oxen, pigs, sheep, chickens, and turkeys; hunting and fishing play a minor role (Twentieth Century). It is the common people within the community that are responsible for the production of agricultural goods, while these people are gathering food for their families and community, other Kogi higher up on the hierarchical ladder have “the delicate task of preserving the universe.”

At the top of the hierarchy are the Mamas or Mamos, which means sun. The Mamas spiritual education is what makes Kogi culture so unique. First, those infants that seem to possess a certain divinity about them are taken and educated in the mountains for the next 18 years. The first 9 years of training are spent in the dark caves of the Sierra Nevada where the young Kogi are trained by “Moros” or priests. After 9 years the Moros and Mamas in training can decide to abandon or continue the training. If they decide to continue the training, the Mamas in training spend another 9 years in the cave. At the end of this time, the young Kogi emerge as Mamas possessing all the moral and spiritual attributes to lead society. However, lacking practical knowledge, the Mamas work in conjunction with the Comisario, the village headman who delegate tasks to the Cabos; the Cabos work with older, reputable men in the village known as Mayores to oversee the production of goods manufactured by the common people (Twentieth Century). 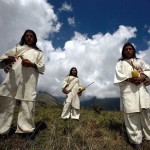 Kogi Watching over the World

From the Mamas to the common people, religion is the unifier of the Kogi culture. To the Kogi, the Sierra Nevada is the “place of creation” and view themselves as the Elder brothers of humanity. Being the Elders of humanity they believe it is their responsibility to care for the planet and to make sure that all remains balanced. It is through their practice of meditation that they are able to keep the world in balance. Their desire to live in harmony with nature underlies their basic belief in “Aluna”, a “generative spiritual force in which all things exist and from which all things take their being” (Twentieth Century). This basically means that everything that happens in the visible universe also happens in an invisible or spiritual universe, and the Mamas are trained to see what happens in the spiritual world first. With the aid of the cocoa plant, the Kogi men and Mamas partake in shamanistic practices. Most recently, the Kogi have been concerned about the destruction of the rain forest and all the damage the world outside of the Sierra Nevada, the Little Brothers, are doing to the world’s environment. The Kogi have realized that the mountain they have lived in for centuries is slowly dying, they noticed how the snow on their mountaintops stopped falling and the rivers were shallow. They attribute the decay of the earth to the greed of the Little Brothers and the impact this greed has on the environment (Tierra y Vida).

Through the communication with the spiritual world, the Mamas have seen this impending destruction of the world. In the 1990, the Kogi emerged from the mountains to confront the Little Brothers on the destruction that is taking place and that if it is not stopped, the earth we know will come to an end. In 1988, the Kogi granted BBC journalist Alain Ereira admittance into their “world” to document their culture and what’s come to be known as the “Elder Brother’s Warning” (Kogi: Lost Tribe). In Ereira’s documentary, The Elder Brother’s Warning or The Message from the Heart of the World, the Kogi issue a direct warning to any Younger Brother who will listen, “Up to know we have ignored the Younger Brother. We have not deigned even to give him a slap. But now we can no longer look after the world alone. The Younger Brother is doing too much damage. He must see, and understand, and assume responsibility. Now we will have to work together. Otherwise, the world will die” (Tierra y Vida: The Kogi).

Through his interactions with the Kogi, Ereira was given a glimpse into the culture only few have ever experienced. It was Ereira that discovered that before 1492 nearly one-third of a million people inhabited the Sierra Nevada that are now referred to as “Lost Cities”. As of 1990 the numbers had dwindled to a mere 12,000 Kogi inhabitants. Ereira revealed in his documentary that “twelve thousand people living in cities without the wheel, farmers without the plow, educators without the written word Tierra y Vida: The Kogi). Upon Ereira’s departure, the Kogi let it be known that an outsider would never be allowed back in, so it was very, very important for Ereira to share this message with the rest of the world. 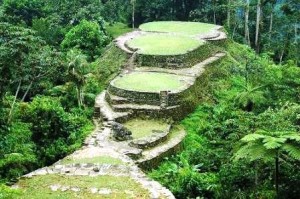 Ereira’s documentary was highly influential in getting the Colombian government to take a stand and not only give back land that had been taken from the Kogi over the years, but also set up the Tairona Heritage Trust that gives support to the Kogi. It was not only the Colombian government that was affected though, grave robbers no longer pillage the ancient ruins in search of valuable artifacts, as many of the grave robbers felt guilty over destroying their ancestors’ land (Tairona: Kogi). However, in 2008, Kenneth Fletcher was admitted to the “border town” of Dumingueka. This town was still a two day hike from most other Kogi villages. Fletcher found this village of 70 families to be more connected to the modern world than the villages Ereira visited. The Kogi showed him a government funded school, modern health clinic and conference rooms that were built with the aid of the Colombian government. Though the Kogi receive supplies from the government, they still feel invisible to the government as farmers and other construction continues to destroy some of their most sacred sites. As modern as this Kogi village may appear, there is still much that connects them with the other Elders higher up the mountain. These Kogi still speak their indigenous tongue, live in thatched huts, walk on dirt paths, and carry around gourds that hold cocoa leaves (Fletcher).

The Kogi, for the most part have remained unchanged for nearly 1000 years. Despite struggles with Spanish invasions, the Colombian government, and modern day guerillas, the Kogi culture has resisted and remained intact. Their devotion to their land and the well-being of Mother Earth is unwavering which is what makes them so unique and so capable of resisting incursions. Their wisdom and spirituality, perhaps never heard of before is insightful and yes, prophetic. What is most impressive is that the Kogi are able to tell the state of Mother Earth just from the changes they are experiencing on their land. They know that it is the greed and disregard for Mother Earth’s well-being that will eventually destroy the world if the nations of the world do not do something about it. As unified on this as they may be, there is still an element of irony. Fletcher noted that perhaps the accessibility of Dumingueka could threaten what the Kogi culture has been trying to fight off for the past 500 years. Whether or not this could be the case is irrelevant though to the well-being of Mother Earth; it is going to take the nations of the world, not just the Kogi to save it from destruction. To Ereira the Mamas reassured, “The world does not have to end. If we act well, the world will go on.” 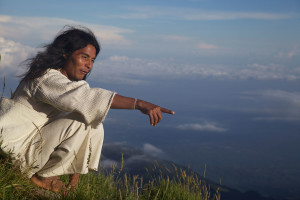