Today I was offered organic (wild) purslane at the local market whilst buying my organic vegetables for the week. I’d heard of purslane, but not come across it in New Zealand. I am sure it’s there though. The farmer told me it is a very healthy plant to eat, but didn’t say much more. Always on the lookout for aboriginal foods I’ve done a little research on purslane (portulaca oleracea) and will share what here what I discovered. 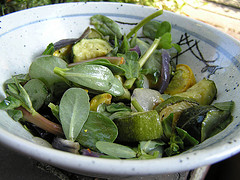 Let’s start with what matters most to most people. If it doesn’t taste palatable few are likely to eat it. So how’s purslane taste?

Purslane is a succulent plant and it tastes delicious. Crisp, and slightly sour sweet. It does not, to my pallet, taste bitter, and not astringent. It is watery and fresh. You can eat the stalks and the leaves. Did I mention it is delicious? The stems contain tannins that make them almost peppery like arugula (aka. rocket, roquette, rucola, rugula). Funnily, in Malawi, the name for the fleshy, round-leafed plant translates to “the buttocks of the wife of a chief.”

It likes to grow in rich soils so many gardeners consider it a weed, because it will happily move into their nicely enriched garden beds. Sadly, most people pull it out—at least that’s what I’ve learnt. I even saw a Youtube video showing how to grow food organically and the folks in the video were pulling purslane out as a “weed” (along with dandelions, which are another great food). The US Department of Agriculture classes it as a “noxious weed”. All we’d have to do is start eating it, and it would be transformed into a super food.

An article in the Chicago Tribune described it as, “The moisture-rich leaves are cucumber-crisp, and have a tart, almost lemony tang with a peppery kick. But taste is not the only reason to eat it.“

Here’s a mix of info on Purslane from Wikipedia: 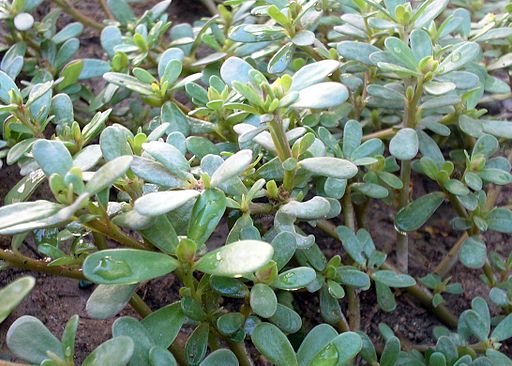 Portulaca oleracea (Common Purslane, also known as Verdolaga, Pigweed, Little Hogweed, or Pusley), is an annual succulent in the family Portulacaceae, which may reach 40 cm in height. Approximately forty varieties currently are cultivated. It has an extensive Old World distribution extending from North Africathrough the Middle East (called الرجلة or البقلة) and the Indian Subcontinent to Malesia and Australasia. The species status in the New World is uncertain: in general, it is considered an exotic weed, however, there is evidence that the species was in Crawford Lake deposits (Ontario) in 1430-89 AD, suggesting that it reached North America in the pre-Colombian era. It is naturalised elsewhere and in some regions is considered an invasive weed. It has smooth, reddish, mostly prostrate stems and alternate leaves clustered at stem joints and ends. The yellow flowers have five regular parts and are up to 6 mm wide. Depending upon rainfall, the flowers appear at anytime during the year. The flowers open singly at the center of the leaf cluster for only a few hours on sunny mornings. Seeds are formed in a tiny pod, which opens when the seeds are mature. Purslane has ataproot with fibrous secondary roots and is able to tolerate poor, compacted soils and drought.

Purslane is understood by scientists to have the highest amount of omega-3 fatty acids of any land based plant, and it is also an excellent source of beta carotene. Scientists also report it has 10 to 20 times more melatonin than any other fruit or vegetable they know about and have tested. Melatonin has been shown to help the body keep cancer at away.

Dr. Artemis Simopoulos described said, “It’s a miracle plant.” She is the president of the Center for Genetics, Nutrition and Health in Washington, and she discovered while working at the National Institutes of Health that the plant had the highest level of Omega-3 fatty acids of any other green plant.

Her research was first reported in the New England Journal of Medicine in the late 1980s, but it has taken time for nutrition awareness and food culture to catch up. At least in the United States. Purslane has been eaten for ages in places like Crete and Uzbekistan.

It also contains vitamins (mainly vitamin A, vitamin C, and some vitamin B and carotenoids), as well as dietary minerals, such as magnesium, calcium, potassium, and iron. Also present are two types of betalain alkaloid pigments, the reddish betacyanins (visible in the coloration of the stems) and the yellow betaxanthins (noticeable in the flowers and in the slight yellowish cast of the leaves). Both of these pigment types are potent antioxidants and have been found to have antimutagenic properties in laboratory studies.

100 Grams of fresh purslane leaves (about 1 cup) contain 300 to 400 mg of alpha-linolenic acid. One cup of cooked leaves contains 90 mg of calcium, 561 mg of potassium, and more than 2,000 IUs of vitamin A. A half-cup of purslane leaves contains as much as 910 mg of oxalate, a compound implicated in the formation of kidney stones, however, note that many common vegetables, such as spinach, also can contain high concentrations of oxalates.

The following products (in the USA) may be of interest to you if you want to grow purslane (these links go to Amazon.com):