New Zealand Grants a River the Rights of Personhood (09/2012)

In 2012 New Zealand granted the Whanganui river similar rights to those of a “person”. It was a bold move, reflective of the local Maori indigenous views that natural elements such as rivers, lakes, mountains, etc., have a living spirit, and are conscious. Such natural elements are considered to be a fundamental component of our ancestry. This act follows a similar move made by the people of Ecuador in 2008, legally acknowledging the rights of forests, lakes, and waterways. Whilst these legal motions may be somewhat indicative of our exceedingly anthropocentric perception of the natural world, it is at least a life-affirming move toward transforming our relationship to the Earth from one of humans using her as nothing more than a resource and recreational playground, to that of relating to her as a living Being (as has been done for thousands of years). The full article on this story is what follows…

From the dawn of history, and in cultures throughout the world, humans have been prone to imbue Earth’s life-giving rivers with qualities of life itself — a fitting tribute, no doubt, to the wellsprings upon which our past (and present) civilizations so heavily rely. But while modern thought has come to regard these essential waterways more clinically over the centuries, that might all be changing once again.

Meet the Whanganui. You might call it a river, but in the eyes of the law, it has the standings of a person.

In a landmark case for the Rights of Nature, officials in New Zealand recently granted the Whanganui, the nation’s third-longest river, with legal personhood “in the same way a company is, which will give it rights and interests”. The decision follows a long court battle for the river’s personhood initiated by the Whanganui River iwi, an indigenous community with strong cultural ties to the waterway.

Under the settlement, the river is regarded as a protected entity, under an arrangement in which representatives from both the iwi and the national government will serve as legal custodians towards the Whanganui’s best interests.

“Today’s agreement which recognises the status of the river as Te Awa Tupua (an integrated, living whole) and the inextricable relationship of iwi with the river is a major step towards the resolution of the historical grievances of Whanganui iwi and is important nationally,” says New Zealand’s Minister for Treaty for Waitangi Negotiations, Christopher Finlayson.

“Whanganui Iwi also recognise the value others place on the river and wanted to ensure that all stakeholders and the river community as a whole are actively engaged in developing the long-term future of the river and ensuring its wellbeing,” says Finlayson.

Although this is likely the first time a single river has been granted such a distinction under the law, chances are it’s not the last. In 2008, Ecuador passed similar ruling giving its forests, lakes, and waterways rights on par with humans in order to ensure their protection from harmful practices.

And, while it may seem an odd extension of rights, in many ways it harkens back to a time when mankind’s fate was more readily acknowledged as being intertwined with that of the rivers, lakes, and streams that sustained us — a time in which our purer instincts towards preserving nature needn’t be dictated by legislation. 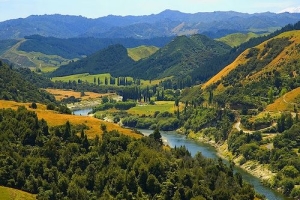