Global Recognition of the Divine Mother ?

Was there Global Recognition of the Divine Mother ?

I was reading through an interesting web page with information on ancient prophecies. Someone made the comment[1]A quote from the comment, “the concept of a “mother earth” is a new idea…its been said that if people speak of this term to … Continue reading that the idea of an “Mother Earth” within native North American cultures is a new idea. The commenter seemed to primarily be referring to it being a new term within Native American ideology, suggesting that it arose from a book credited to Black Elk of the Sioux, and that the concept then became popular in the 1980’2 onward. He said he has found no reference to this concept across Canadian or North American native tribes.

Here’s what I wrote in reply to his observations… which I am posting here as it may be of interest to my readership.

The Earth Mother, and the Mother of the Earth

I am not sure whether you are particularly looking for reference to the exact phrase “mother earth” or for something that references that concept. The concept most certainly exists globally, and there is evidence showing it goes back at least twenty to thirty thousand years or more. However, I am no historian of Native North American traditions, so I can’t comment there. But, I can give other examples which indicate it’s highly UNLIKELY the Native North American’s had no concept of the mother of creation, and of the Earth as a Motherly Being.

In New Zealand, the Maori refer to Papatuanuku. That’s the Earth Mother in Maori language. She is the Mother of all that is of the Earth, and some would say Father Sky was separated out from Her also. Her recognition dates back thousands of years, and is found throughout the Pacific Islands.

The Kogi people of Colombia (a pre-Colombian civilisation still intact today) refer to the Mother in a vast array of manifestations. One of those is the Mother of the Earth. But for them, pretty much everything has a Mother. Mountains, lakes, species, the Sun, etc., are all born out of a the Mother. The very existence of the Kogi is dedicated to the Mother. They also refer to the creative dimension or “mind” of the Mother… called Aluna.

Elsewhere throughout the Andes there is the recognition of Pachamama, the Earth Mother, the source and creator of all life on Earth.

In India, and within Hinduism, there are a multitude of references to the Mother aspect of creation. Based on my limited knowledge of such things, as far as I know the most cosmic and all-encompassing is Adi Para Shakti, the Mother of all creation. Quoting from Wikipedia, According to Hindu mythology, Adi Para Shakti—the Goddess, Devi—is the Supreme Being and recognized as Para Brahman. She is also known as “Parma” means supreme, “Satya” means the Truth as per many shakta texts. The Devi Bhagawata Mahapurana suggests that Adi Parashakti is the original creator, observer and destroyer of the whole universe. As per Shaktism, Adi Parashakti appeared as Divine Pure Eternal Consciousness i.e. Shoonya Bindu or Nirgun Brahman, the divine zero feminine energy, which then expresses itself as prakriti (Universal Nature) 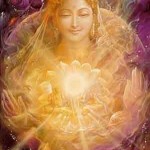 Adi Para Shakti is certainly not a direct reference to the ‘Mother Earth’ as such, and yet she is recognised in many forms. One of her forms or emanations is referred to as Gayatri, who some also consider to be Aditi (more on her in a moment). There’s also Shakti, which can refer to more of an Earthly creative mother energy that animates all life-forms. Another example is Nullri Laksmi, the eternal consort of Lord Visnu and life-giver to him and all the world. Then there’s the Goddess Devi, in whom the world and gods exist and flourish. We also find within Hinduism recognition of Aditi, the mother of all the Gods, and the creator of all forms and beings. There are many other similar Divine, Cosmic, and Earth Mother names and deities in the Hindu culture. Adi Para Shakti is also recognised in the emanation known as Mula Prakriti (i.e. Mother Nature), who gives birth to all life forms as plants, animals, and such from Herself, and she sustains and nourishes them through her body, which is the earth with its animal life, vegetation, and minerals. Ultimately she re-absorbs all life forms back into herself, or “devours” them to sustain herself as the power of death feeding on life to produce new life. She also gives rise to Maya (the illusory world) and to prakriti, the force that galvanizes the divine ground of existence into self-projection as the cosmos. The Earth itself is manifested by Adi parashakti.

Early Christian ideology also referred to the Mother. Not specifically “Earth Mother” but most certainly a Divine Feminine aspect of Creation. Early Gnostic Christian texts refer to the Mother extensively. I suggested reading the Gospel of Saint Thomas for plenty of examples. The Catholic concept of the Mother Virgin Mary was also used as a representation of the Divine Mother, and had links to the notion of the Mother of the Earth, even as the Mother of God.

It also helps to look at the meaning behind common English words. The English word “matter” comes from the Greek and Latin word ‘matar’, meaning Mother. This is reflective of a culture and ideology that related to the Earth and the physical dimension as a Mother or Motherly force.

‘Earth’ in Greek is ‘Gaia’, which also refers to a feminine Goddess deity who is the Mother of the Earth.

Throughout Slavic, Scandinavian, European, Middle Eastern, North African, Celtic, Roman, etc., cultures are a plentitude of names and references to the Earth Mother. Screeds and screeds of them, actually. Way too many to list here.

The word ‘Terra’, which in English refers to Earth, is Roman for the Goddess who is the personification of the Earth. The term Terra Mater was a common reference to the Mother Earth.

The exact term “Earth mother” in English is etymologically attributed back to at least 1904, as a literal translation of German ‘erdmutter‘, which refers to a Goddess that is the source of Life. Again, it means “Earth Mother”.

Mother in the Americas?

As for Canada and North America? Well, as I said… I am not an expert on such things. But in light of what I have just shared above, I would be VERY VERY surprised if somehow the vast number of tribes and cultures that once lived in those regions of the Earth were collectively somehow one of the only ancient human cultures and traditions to be oblivious to the notion of the Earth Mother… to the mother as the source of all Life, and form, of their very being.

Not content with leaving this subject without addressing the Native (North) American relationship to ‘Mother Earth’, I’ve done a little research into the Native American side of this story… and here are a few quotations that indicate to me the concept of Mother Earth in Native North America is not something that arose out of the 1960’s:

There’s also plenty of interesting reading here: https://en.wikipedia.org/wiki/Mother_goddess
Whilst it’s not all specifically about “Earth Mother”, it’s all relevant, and there is a section on Earth Mother traditions.

Granted, I’ve not researched the original sources of these quotes, so they might all be invalid. But I doubt that’s the case, and they certainly seem on parr with what one might expect, based on how most other ancient and indigenous cultures had an appreciation of the Divine Mother, and of the Earth as Mother, or the Mother of the Earth.

Comments from a reader

A reader of my article shared the following with me on the topic of Earth Mother in Native American culture (edited to focus on what was relevant):

I researched the Global Goddess culture for some 25 years to be able to really share the incomparable picture of just how widespread Matriarchy and Amazonism was just as Patriarchy became global. There was not a place in the world that did not have Matriarchies and Amazons. However there are and have always been some Native American tribes that are Matriarchal, such as the Iroquois. In their culture, to this day, the women are the leaders and are in charge of the food and war. How that works is that if men want to go to war and the council of women do not agree then the men who want to make war will not have any food and for many generations that kept the culture working well and staying alive.

So where did The Mother go?

Looking at the above information—which really only scratches the surface of this topic—it would seem the Mother took a long holy-day somewhere, other than here on Earth. In contemporary “Western” societies there is almost zero reference to the “Divine Mother” and the “Earth Mother”. She’s all but vanished. Where did she go, and how?

Of course, the Mother didn’t go anywhere. It’s a question of where did she go within our view of the world? Some people speak of us living in an age of materialism which is in fact maternalism, at its root, which implies the -ism of the Mother. Yet our society is basically oblivious to the idea of the Divine Mother. Some religions refer to the Divine Father, yet want to us to believe the Mother’s gone on eternal maternity leave or something. Having said that, the current Pope (Pope Francis) has strongly encouraged Roman Catholics to rekindle their appreciation of the Mother[2]https://cruxnow.com/vatican/2018/03/03/pope-francis-establishes-new-feast-mary-mother-church/[3]https://www.vaticannews.va/en/pope-francis/mass-casa-santa-marta/2018-05/pope-francis-mass-santa-marta-mary-church-woman-mother.html[4]“One thing is certain: we can no longer turn our backs on reality, on our brothers and sisters, on Mother Earth,” he said in a first speech at … Continue reading[5]“LAUDATO SI’, mi’ Signore” – “Praise be to you, my Lord”. In the words of this beautiful canticle, Saint Francis of Assisi reminds us … Continue reading

From my perspective the Mother was systematically and intentionally removed from the Human story. She was an inconvenience, in more ways than one. Those who wished to maintain power and control over the world wanted to do without her. Millions of Goddess worshiping women were killed right across Europe not that long ago. Nearly all pagan (and Goddess worshipping) traditions were intentionally whipped out. Indigenous and native cultural traditions (and often the entire culture and race) were destroyed all over the Earth. Most of this madness was done in the name of spreading an almost entirely patriarchal religion around the world. A religion that previously eliminated its own references to and acknowledgement of the Divine Feminine. [Although, with Pope Francis, that might be changing. See above, and the references below]

So it’s not that the Mother has gone. She’s as present as a human mother is present to the birth of a human child. Simply put, the Mother is indispensable. We just need to open our spiritual eyes (and Heart) and See her.