The US FDA continues to support toxic mercury dental fillings

After enormous public pressure from scientists, dentists, health professionals, and consumers, the U.S. Food and Drug Administration (FDA) promised to make an announcement about dental amalgam by the end of 2011.

Dental amalgam, of course, is composed 50% of the dreadful neurotoxin mercury.

Jeffrey Shuren, director of the Center for Devices and Radiological Health (CDRH, the branch of the FDA responsible for the approval and safety of all medical devises) said at a public hearing in September, in San Francisco, that FDA will make an “announcement” on a new amalgam policy  by the end of 2011.

When questioned by a reporter at a major newspaper, FDA repeated that it would act in 2011.

As 2011 came to a close, the suspense grew as everyone speculated whether FDA would act or whether it would continue its decades of protecting the profits of pro-mercury dentists instead of protecting the health of American children.

With just six minutes left in the work year, at 4:54 pm on Friday, December 30, FDA conceded that no announcement was forthcoming – not in 2011, and maybe not at all.

So when the respected trade publication FDA Webview asked, Liscinsky said:  No announcement.

And no target date for FDA to do anything on amalgam.

Instead, FDA said what it said ten years ago: it will “continue to study the safety of amalgam.”

FDA has broken yet another promise on amalgam.

Why Won’t the FDA Act to Protect You Against Toxic Mercury?

The FDA’s history of protecting dental amalgam is a long one.

For the past 32 years, the agency has refused to issue any public warning about its neurotoxic risks, and in 2009, the FDA declared it safe under Class 2 for adults and children over the age of 6 who are not allergic to mercury—despite the overwhelming evidence showing mercury to be highly toxic and easily released in the form of vapor each time you eat, drink, brush your teeth or otherwise stimulate your teeth.

These mercury vapors readily pass through cell membranes, across your blood-brain barrier, and into your central nervous system, where it can cause psychological, neurological, and immunological problems.

Children and fetuses, whose brains are still developing, are clearly most at risk, but anyone can be impacted, and the health risks get greater the longer you have your fillings.

According to Boyd Haley, retired professor emeritus at the University of Kentucky (where he headed the chemistry department), about 80 percent of the mercury vapor released from your fillings collect in your body tissues and can take months or years to eliminate. Needless to say, if your body keeps accumulating more mercury than it can eliminate, after many years of chronic exposure you may end up with quite a bit of accumulated mercury in your body. Studies on cadavers have confirmed that the more amalgam fillings a person has, the more mercury collects in their brain, for example.

Many hoped that the FDA would reconsider this foolish stance after the World Health Organization called for the phasing-out of amalgam in their 2011 report: Future Use of Materials for Dental Restoration. In May 2011, the Council of Europe also issued a proclamation calling for restrictions and prohibitions of mercury fillings, which are already banned in Norway, Sweden, and Denmark. Health Canada also stopped endorsing amalgam for use in children, pregnant women, and people with impaired kidney function, all the way back in 1996!

The World Health Organization noted the following three reasons for its new position:

The report also included mention of the known toxic effects of mercury exposure, stating that:

“Mercury is highly toxic and harmful to health. Approximately 80% of inhaled mercury vapor is absorbed in the blood through the lungs, causing damages to lungs, kidneys and the nervous, digestive, respiratory and immune systems. Health effects from excessive mercury exposure include tremors, impaired vision and hearing, paralysis, insomnia, emotional instability, developmental deficits during fetal development, and attention deficit and developmental delays during childhood.”

Why Does the FDA Ignore its Own Experts?

In December 2010, in response to the outrage over their 2009 ruling, the FDA asked an advisory panel to examine the latest science on amalgams. The panel recommended that the FDA promptly:

Still, the agency hesitated… Then, last year Shuren attended a series of town hall meetings around the US, where he heard so much criticism against the agency’s amalgam policy that he eventually started saying the agency would act on the petitions to reconsider its position. As recently as November 30, the FDA confirmed to the Chicago Tribune that it did indeed intend to address amalgam in 2011, stating that:

” … in response to concerns about its [2009] ruling, the FDA convened a panel last December to re-examine the issue and expects to make a new announcement by the end of this year.”

But, it didn’t… According to Charlie Brown, national counsel for Consumers for Dental Choice, and President of the World Alliance for Mercury-Free Dentistry:

“At Jeff Shuren’s Center for Devices, politics wins. Science loses. Thirteen months ago, FDA’s own advisory panel of handpicked scientists told FDA to stop amalgam use for children and pregnant women. But Shuren fails to heed the scientists — even though, since September, he repeatedly announced that he intended to act on amalgam in 2011. Every day that Shuren fails to act, more children are subjected to this mercury product, which — FDA’s own rule concedes — can have ‘neurotoxic effects’ on the ‘developing neurological systems’ of children and unborn babies.”

No One NEEDS Amalgam to Remain Available…

Dental amalgam is far from an essential dental product; it’s interchangeable with many other filling materials that do not have the toxic profile amalgam has. Just consider these disturbing facts:

Modern materials like resin composites and glass ionomers have rendered amalgam completely unnecessary for any clinical situation. In fact, the mercury-free alternatives are so advanced that entire nations, such as the Scandinavian countries, have stopped using amalgam altogether.

Already, about half of U.S. dentists are mercury-free and 77 percent of consumers who are told that amalgam contains mercury choose mercury-free alternatives. One of the most popular alternatives to amalgam is resin composite. Resin composites are made of a type of plastic reinforced with powdered glass. It is already common throughout the U.S. and the rest of the developed world, offering notable improvements over amalgam, as it:

A lesser-known alternative is increasingly making mercury-free dentistry possible even in the rural areas of developing countries. Atraumatic restorative treatment (also called alternative restorative treatment or ART) is a mercury-free restorative technique that has been demonstrated a success in a diverse array of countries around the world, including Tanzania, India, Brazil, Zimbabwe, Turkey, South Africa, Thailand, Canada, and a dozen others. ART relies on adhesive materials for the filling (instead of mercury) and uses only hand instruments to place the filling, making it particularly well-suited for rural areas of developing countries.

How You Can Help Protect Children Everywhere

It’s high time for the FDA start acting on the science and get on the bandwagon to protect the health of children and pregnant women across the U.S.

Your voice is needed in order to bring about permanent change in the fight for mercury-free dentistry. The FDA reneged on their stated intent to address dental amalgam by the end of 2011. We now need you to urge the FDA to heed the advice of its own scientists convened in December 2010 and the World Health Organization. To voice your opinion, please contact Dr. Shuren.This time, we think it best if you telephone or fax, and make your message more direct, rather than emailing Dr. Shuren:

If you can’t get through to Dr. Shuren via phone or fax, please write Anthony Watson, Director of the Division on Devices, anthony.watson@fda.hhs.gov.

Phone calls and faxes are especially important because Dr. Shuren cannot ignore them – keep calling and leaving messages until you get answers! Here are some recommended talking points when you call or write:

It is time for the FDA to get out of the way of progress. Please join Charlie and me in keeping the pressure on them — let’s not allow them to manipulate their way into placing dental industry profiteering before of your children’s health.

I also urge you to tell your family, friends, and neighbors the truth about dental amalgams, and don’t let your dentist talk you into one for yourself or for your child. It’s not your dentist’s mouth—it’s YOUR mouth. And YOUR pocket book—which holds a great deal of buying power. If your dentist insists mercury is safe, you may want to seek a mercury-free dentist.

Last but not least, please consider making a contribution to Consumers for Dental Choice. I strongly believe in their mission and their commitment to the Campaign for Mercury-Free Dentistry. They rely on public donations to complete this important mission. (Consumers for Dental Choice is a 501(c)(3) non-profit organization dedicated to advocating mercury-free dentistry. Contributions are tax-deductible in the U.S.)

Donations can be made online or through the mail: 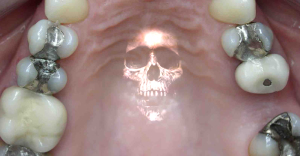