Essential Viewing: The Century of the Self by Adam Curtis

The Century of the Self is a brilliant four-part documentary that I consider to be essential viewing for people wishing to be more conscious in this artificial world we live in. It was produced by Adam Curtis and released in 2002. You can read a description of it here on Wikipedia.

It was released in four parts, each an hour long, as listed below. Although in the version viewable below, they have been combined into one four hour documentary.

If you don’t have the time to watch it in one sitting, I recommend watching in one hour segments, and returning to watch the rest. Remember to click the fullscreen button for better viewing.

Adam Curtis’ acclaimed series examines the rise of the all-consuming self against the backdrop of the Freud dynasty.

To many in both politics and business, the triumph of the self is the ultimate expression of democracy, where power has finally moved to the people. Certainly the people may feel they are in charge, but are they really? The Century of the Self tells the untold and sometimes controversial story of the growth of the mass-consumer society in Britain and the United States. How was the all-consuming self created, by whom, and in whose interests?

Sigmund Freud’s work into the bubbling and murky world of the subconscious changed the world. By introducing a technique to probe the unconscious mind, Freud provided useful tools for understanding the secret desires of the masses. Unwittingly, his work served as the precursor to a world full of political spin doctors, marketing moguls, and society’s belief that the pursuit of satisfaction and happiness is man’s ultimate goal. 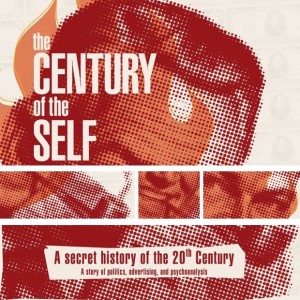