There’s a massive environmental disaster taking place in Canada, right now, as you read this. It’s not an accident. It didn’t require an earthquake or some other environmental event to bring it about. This massive disaster is being carried out by Man, intentionally. Canadian oil sand mining is the largest industrial project on the face of the Earth, and the largest in human history. These oil sand projects make Canada the world’s 5th largest oil producer, and the USA’s number one foreign oil supplier.

The scale of the collective oil sand mining projects in Canada are enormous. To put the size into perspective (for those who have some visual appreciation of how big various countries and states are)… We’re talking about an open pit bitumen / oil-sand mining operation almost the size of the South Island (Te wai pounamu) of New Zealand. The following US states each cover roughly the same area (within 10,000 km2 above or below the 141,000 km2 area of the Alberta Oil sand deposits): Iowa, New York, North Carolina, Arkansas, Alabama, Louisiana. It’s roughly twice the size of Panama, three times the size of Costa Rica, and approximately the size of Greece.

The pollution generated by these mining operations is enormous, and likely hard for most people to accurately comprehend. About 20% of the feasible oil sand deposits are on the surface, but the rest is as much as 75 meters (246 feet) below the surface. Around US$19 billion are invested into these projects yearly.

The following videos provide some information on the Alberta Oil Sands mining operations:

An interesting and informative documentary on the issues involved. A full description of this two-part video is below.

Canada’s Tar Sands: The most destructive project on Earth?

This is a 42 minute video. It is rather slow, and is without verbal comentary. It provides mostly a visual perspective on the Alberta oil sand mining projects.

For the facts and details on Canada’s oil reserves and mining operations, exports, imports, etc., I recommend reading the Canada page on the US Energy Information Administration site.

Some photos with information are also available online in the National Geographic site, here:  http://bit.ly/1Io9aMN

Information provided with the To the Last Drop documentary:

Residents of one Canadian town are engaged in a David and Goliath-style battle over the dirtiest oil project ever known.

The small town of Fort Chipewyan in northern Alberta is facing the consequences of being the first to witness the impact of the Tar Sands project, which may be the tipping point for oil development in Canada.

The local community has experienced a spike in cancer cases and dire studies have revealed the true consequences of “dirty oil”.

Gripped in a Faustian pact with the American energy consumer, the Canadian government is doing everything it can to protect the dirtiest oil project ever known. In the following account, filmmaker Tom Radford describes witnessing a David and Goliath struggle.

I shot my first film, Death of a Delta, in Fort Chipewyan in 1972. I shot it with a hand crank Bolex camera with a maximum 26-second wind. I had to make sure people knew what they were talking about. There was no time for red herrings. In our new film, To the Last Drop, the latest in digital HD and Cineflex cameras capture the landscape of northern Alberta as never before.

But while technology can go through multiple revolutions in 39 years, the issue that drives both our films remains the same: the rights of downstream communities, and the need to recognise those rights, no matter how powerful their upstream neighbours.

Death of a Delta documented the fight of Fort Chipewyan to have a voice in the construction of a massive hydroelectric project on the Peace River, the W.A.C. Bennett Dam. At stake was not only the survival of the oldest community in Alberta, but the protection of a World Heritage site, the Peace Athabasca Delta, a convergence of migratory flyways and the greatest concentration of waterfowl on the continent.

In the David and Goliath struggle that ensued, David won. Water was released from the dam and water levels in the Delta returned to normal. The unique ecology of the region was saved. The town survived.

Today, that same David, the collective will of the thousand residents of Fort Chipewyan, is fighting an even more imposing Goliath. The Alberta oil sands is arguably now the world’s largest construction project. Its expansion will have an estimated $1.7 trillion impact on the Canadian economy over the coming decades. An area of boreal forest the size of Greece will be affected by industrial activity.

Once again the issue is water, but this time it is not just the flow of the river, but the chemicals the current may be carrying downstream from the strip mines and bitumen upgraders.

In recent years, according to the Alberta Cancer Board, Fort Chipewyan has experienced an unusually high rate of cancer. Local fishermen are finding growing numbers of deformed fish in their nets. Residents and John O’Connor, the community doctor, worry there could be a connection to the oil sands.

As they did in the 1970s, the people of Fort Chipewyan have appealed to science for help. Then it was William Fuller, a biologist from the University of Alberta, who collected the data that proved the Delta was dying. Today, it is David Schindler, the winner of the Stockholm Water Prize, and a team of international scientists conducting painstaking research to find out what is in the Athabasca River – and where it is coming from.

Alan Adam, the chief of the Athabasca Chipewyan First Nation, has worked closely with Schindler. He knows that vast areas of the Delta are once again becoming impassable because of falling water levels. This means the hunting, trapping and fishing rights guaranteed to his people in Treaty 8 are worthless.

He has appealed to elders like Pat Marcel and Francois Paulette from neighbouring Fort Fitzgerald to record the changes they are seeing in the water and the wildlife. In a unique exchange, science and traditional knowledge are coming together to challenge the oil sands.

When I first arrived in Fort Chipewyan in 1972, an Indian kid was sitting on the dock singing Hank Williams’ Your Cheatin’ Heart. The old guitar he was playing had about three strings. One verse at a time, we recorded the song with our 26-second camera. Then we tried to get the rights. The kid was no problem, but Nashville will always be Nashville. Too bad. It would have been the perfect cover for all those years of government and industry duplicity.

These days the powers that be are beginning to listen. The recent Oilsands Advisory Panel, appointed by Jim Prentice, the former environment minister, stressed in its December 2010 report the importance of proper research and regulation. We have to know what is in the water.

Maybe David has a chance to win again. Goliath would be better for it. 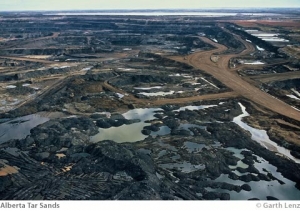